Subjects with Issues noted in the HCP quality control process

As of the S1200 release, a subject data measure (QC_Issue) has been added to ConnectomeDB to flag subjects with notable issues found in the HCP Quality Control process as described for each issue code below.  The issues are notable, but were not considered severe enough to exclude the subject's imaging data from release. We are sharing these findings of issues to alert users and allow them to decide whether to include or exclude these subjects in their own analyses.

The QC_Issue measure allows users to filter the data for subjects with or without these issues in the ConnectomeDB Subject Dashboard or in the CSV spreadsheet containing individual subject data that is downloadable from the site. 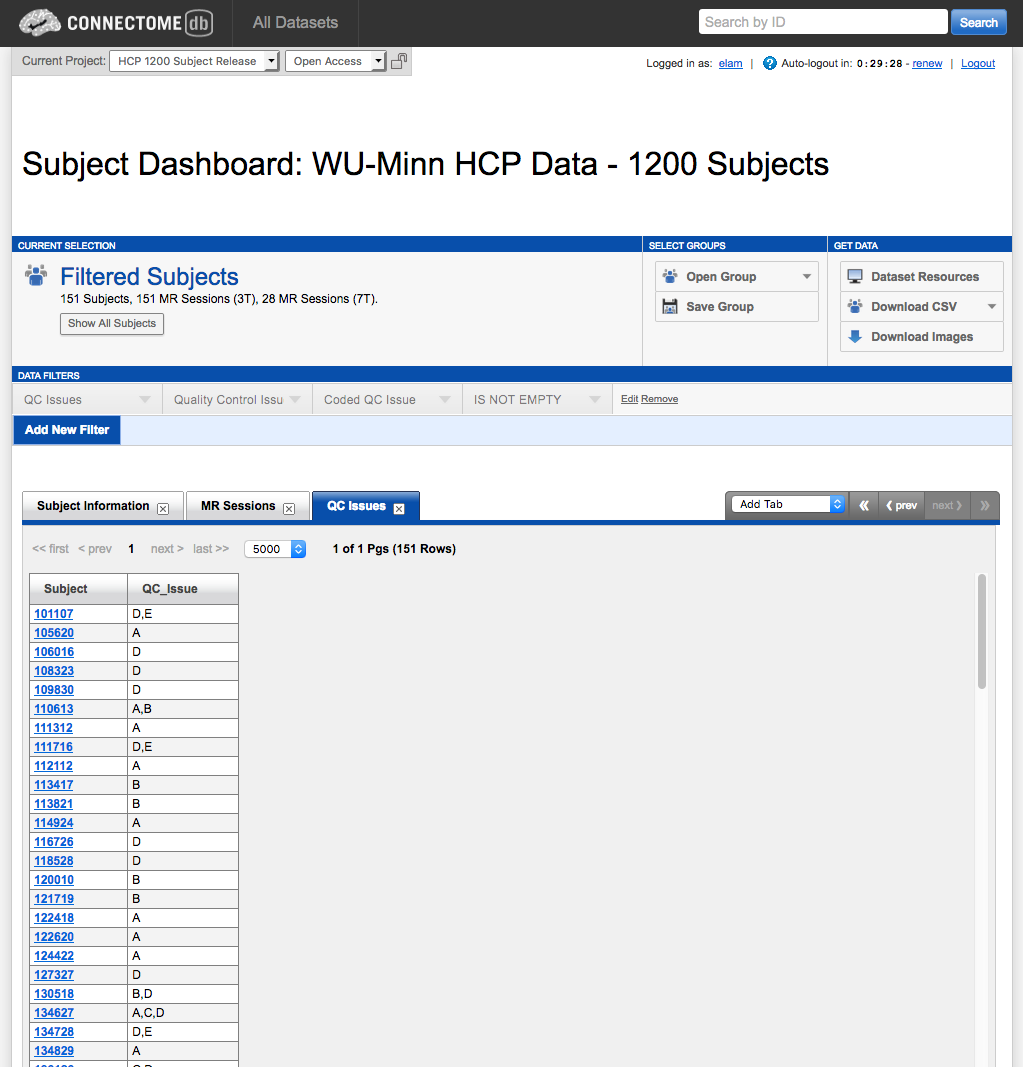 To view the issue codes in the ConnectomeDB Subject Dashboard, click the “Add Tab” dropdown at the top right of the section listing subjects and choose “QC Issues”. To filter on subjects with issue codes, click the “Add New Filter” button, select the “QC Issues” category, “Quality Control Issue Noted” assessment, “Coded QC Issue” attribute, and “IS NOT EMPTY” operator (see image). At the time of the S1200 Release, there are 157 subjects with imaging data available that have one or more QC_issue codes.

Note on the HCP QC process:

We explicitly reviewed the outputs of the HCP Structural Pipelines on all subjects and ascertained that all included subjects had at least reasonable (or better) cortical surface models.  (Examples of some of the issue categories are on the QC Issues wiki page).  However, a comprehensive QC of all modalities was not feasible, and HCP does not claim to have identified all QC issues for all HCP subjects and modalities.  In particular, in the interest of providing data, fMRI and dMRI scans were only very rarely excluded for motion, and we have opted to release fMRI and dMRI scans collected in periods of known (albeit intermittent) problems with the head coil, which resulted in some temporal instabilities in acquisition.

Therefore, the absence of an issues code for a given subject does not imply that there are no issues with the data for this subject. We encourage users to alert us to issues that they discover.  We will then update the QC_Issues field and wiki appropriately for the benefit of other users.

All HCP subject structural scans and FreeSurfer segmentation and surface outputs from the structural pipeline were subject to a standard quality control process that involved manual viewing and rating of scan quality and anatomical abnormalities by an experienced rater (see Appendix 4: Post Session 1 Quality Control SOP, pp. 17-24). Brain anomalies evident in T1w and T2w scans were noted and further reviewed by a radiologist. Subjects with major radiologic anomalies that were expected to substantially impact brain connectivity were removed from the study, and their imaging and behavioral data are not included in the released data.

Some subjects had focal anomalies that are considered as normal variants or benign findings. We have released their data, but because of their altered anatomy, using data from these subjects may affect some analyses. These subjects are flagged with the issue code A in the QC_Issue measure.

All brain surfaces and brain structure segmentation results generated by FreeSurfer as part of the HCP structural pipeline were also inspected by a rater for any notable issues see Appendix 4: Post Session 1 Quality Control SOP, pp. 25-28). If there were major segmentation or surface errors, we reran the pipeline to attempt to fix the issues in an automated way (due to the cohort size of the HCP and limited staff resources, hand editing of segmentations and surfaces was not attempted on any subjects).

Subjects with focal segmentation and surface errors in their structural pipeline outputs are flagged with the issue code B for the QC_Issue measure.

Issue code C: Some of subject’s data acquired during a period of instabilities in the head coil

Since spatially localized temporal instability is particularly problematic for analysis of resting state data, we evaluated network matrices (“netmats”) derived from both the “minimally preprocessed” (MPP) data and the FIX-ICA cleaned data, for all rfMRI runs of all subjects scanned during these periods.  As expected, many of the netmats from the MPP rfMRI data acquired during these periods contained severe artifacts.  Indeed, these periods are a primary contributor to the subjects flagged with Issue Code D (see below).  However, the resting-state netmats following the FIX cleaning process were reasonable in all cases.  Most of the time, FIX automatically removed the temporal instability, as intended.  However, in a small proportion of scans manual reclassification of some of the FIX-ICA components from ‘signal’ to ‘noise’ was necessary to appropriately remove artifact from the FIX-denoised rfMRI scans.  (Subjects for which manual reclassification was necessary in one or more rfMRI scans are indicated via Issue Code E, see below).

The situation is less clear for the tfMRI and dMRI data of these ‘temporal instability’ subjects.  We have not explicitly evaluated the tfMRI and dMRI data of these subjects, but both are very likely to contain artifacts arising from the temporal instability problems with the head coil.  Currently, FIX-denoising has not been applied to the tfMRI data. It is possible that the impact of the temporal instability may be ameliorated to some degree in the released HCP Task Analyses by the model-constrained nature of those analyses.  (However, any analysis of the MPP tfMRI data from those subjects using a “resting-state” like approach is almost certainly problematic).  As for the dMRI data, it is possible that the “outlier correction” feature in ‘eddy’ will yield appropriately cleaned data for subjects scanned during these periods, but this remains to be investigated.

An evaluation of “grayplots” (Power 2016) and/or network matrices generated from each subject's minimally preprocessed rfMRI scan data revealed subjects across the entire HCP study for whom one or more rfMRI scan showed prominent artifacts in their “minimally preprocessed” (MPP) data, due either to coil problems (the majority of cases), or excessive subject motion. Such subjects are flagged with Issue Code D and a spreadsheet listing the specific rfMRI scans exhibiting these artifacts is available below.  We believe this process identified most of the rfMRI scans with the most severe artifacts in their MPP data; nonetheless, it should not be considered a complete, comprehensive list of all of the rfMRI scans with severe artifacts. The list of scans with prominent artifacts will hopefully provide a useful test-bed for evaluating denoising algorithms.

As noted above (for Issue Code C) we evaluated network matrices (“netmats”) derived from both the MPP and the FIX-ICA cleaned data, for all rfMRI runs associated with Issue Code D.  Again, the resting-state netmats following the FIX cleaning process were reasonable in all cases. (As above, if necessary, manual reclassification of some FIX components was performed to ensure appropriate denoising).

In summary, (1) the FIX-cleaned rfMRI scans from subjects with Issue Code D is fine to use; and (2) the MPP rfMRI data from these scans is particularly problematic, and is provided mostly with the intent that it will serve as a useful test-bed for evaluating denoising algorithms.

A list of the rfMRI scans and subjects exhibiting MPP artifact that was cleaned automatically by FIX (Code D) and cleaned after manual reclassification of some FIX components (Code E) are detailed in the following Spreadsheet:  RestScansWithProminentArtifactInMPP_Codes_D&E.xlsx

As noted above for Issue Codes C and D, in a small number of instances the automatic labeling of ICA components as either ‘signal’ or ‘noise’ by FIX was incorrect, and as a result, the initial denoising by the automatic FIX-ICA process was insufficient, and prominent artifacts remained in the rfMRI scans after FIX.  (This probably occurred because the set of scans used to train FIX early in the HCP project did not include some of the more rare/unique types of artifacts that we encountered over the course of the study). For these rfMRI scans, we manually reclassified one or more ‘signal’ components as ‘noise’ components and ran the ReApplyFix pipeline to appropriately clean these data.  Note that for the manually reclassified datasets, we used the original MSMAll registration rather than re-running MSMAll after the reclassification.  We do not expect a substantial difference in registration because MSMAll relies on a multi-variate approach to resting state fMRI modeling (weighted regression) that is more robust than the univariate approaches (e.g. correlation) typically used to generate functional connectivity maps. In addition, for these subjects, the ReApplyFIX (for both MSM-Sulc and MSM-All registrations) and RestingStateStats pipelines were run on the Washington University Center for High Performance Computer (WU-CHPC) Cluster #2, rather than the WU-CHPC Cluster #1, on which all other 3T processing pipelines were run for all S1200 subjects. We note this in full disclosure of how these data were processed differently, but we do not expect that the difference in processing environments will have an effect of the rfMRI FIX results.

Subjects for whom one or more rfMRI scans had some of their FIX components manually reclassified are flagged with the Issue Code E. A list of the specific subjects affected is available below, along with scan level detail in the linked spreadsheet.

Note that the final FIX-cleaned data from rfMRI scans with Issue Code E is perfectly valid to include in analyses.  We provide this Issue Code simply so that interested users can know which rfMRI scans required some manual intervention in the FIX-cleaning process.

A list of the rfMRI scans and subjects exhibiting MPP artifact that was cleaned automatically by FIX (Code D) and cleaned after manual reclassification of some FIX components (Code E) are detailed in the following Spreadsheet:  RestScansWithProminentArtifactInMPP_Codes_D&E.xlsx